I'm alive! Sorry it's been dead this week - I got sick again, believe it or not. (I know - I can scarcely believe it myself. I haven't a clue why my immune system has been so pathetic of late!). I blame the freezing gale-force winds (and my own stupidity for spending so much time outside, despite the weather). So this was a week of runny nose, sore-ish throat, and little comforts, though thankfully I'm feeling much better now: 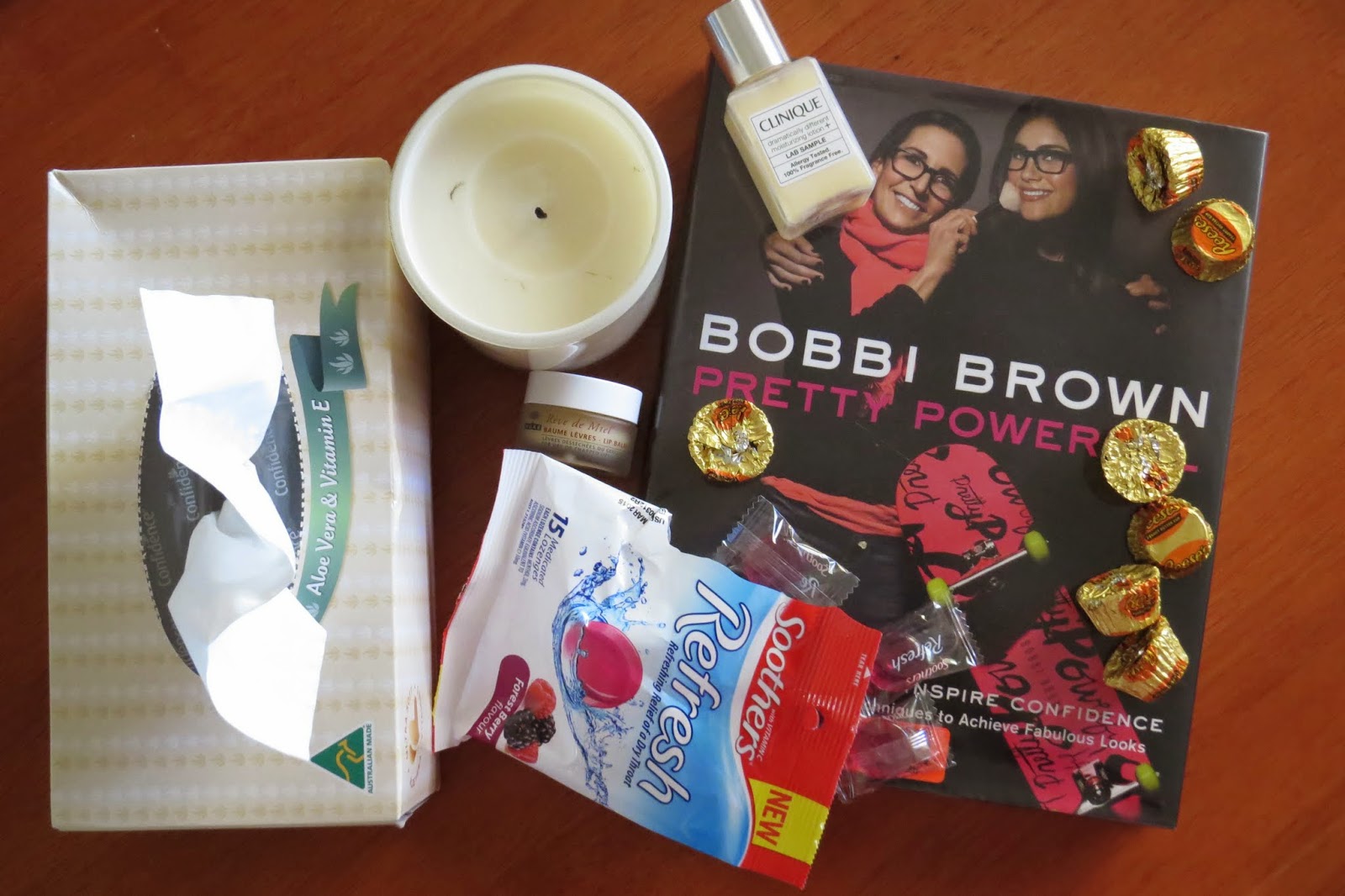 Clockwise from top:
Ecoya Sweet Apricot and Orange Blossom Candle - Yes, I've had it a little while now, and this week I finally burnt it instead of merely sniffing it! I have to say that its scent is prominent enough when unlit, and lighting it was somewhat disappointing for me, as it wasn't distinctly more potent. I've found it a nice accompaniment to reading, as a way to wind down after work.

Clinique Dramatically Different Moisturising Lotion+ - I've also had this for nearly a year now - it had previously been sitting on the shelf during the warmer months as it is quite emollient. Now that the weather calls for something more moisturising, I find this fits the bill perfectly. It's lightweight, easily absorbed, kind to my sensitive skin and rather hydrating. You can expect to see this one again soon.

Pretty Powerful by Bobbi Brown - I've been taking it easy this week, to give myself the best chance to recover (after learning the hard way from past experiences). I headed to the library with the intention of getting lost in the pages of all kinds of books, when I came across this. I've been meaning to read it for a long time now, and I'm glad I finally got the chance to. I love Bobbi's books for their detail and photographs - and her writing style, which is frank in clarifying the essentials and the 'nice-to-haves'. More to come on this one.

Reese's Peanut Butter Cups - I concede that I may be slightly obsessed. I'd thought Reese's were not available here, and tried Whittaker's Peanut Butter block, which I thought was the next best thing, but I came across these the other day. I must say that I have newfound respect for Aldi! Trust me, they're goooood.

Nuxe Rêve de Miel - I know I've waxed lyrical about this already, but I thought it was worth a mention again. With consistent use, I've found that its texture has changed a bit. I don't know if it's just mine, but at first it was hardened at the top, and creamier underneath. It went through a 'melty' stage, and a 'lemon curd' stage, and now it's kind of in between the hardened top and creamier middle. Strange. But consistency aside, I haven't any issues with it.

Soothers Refresh medicated throat lozenges, Forest Berry flavour - These are quite nice - I saw that they'd released a new flavour and thought I'd try it. These have been 'soothing' for my throat while at work - talking to people for 5+ hours really wears me out!

Confidence Aloe Vera tissues - You know the drill! Though I think I prefer Kleenex...


Hope your week was better than mine! x